Covering state government is our primary mission, but there are a lot of other exciting things happening at TVW as well!

The period between session allows us to regroup and think about how we can improve the coverage and services that are so crucial to our viewers. It’s also an important time to produce our own programs and really let our talented staff shine.

This edition of the TVW Newsletter contains some things that might surprise and we hope, delight you. From exploring our majestic public lands on State Parks to discovering charming out-of-the way treasures on My Favorite Places with Ralph Munro, TVW highlights the incredible beauty and diversity of our great state.

So fire up your tablet or phone, TV or laptop and relax with some of these great programs!

With the end of the legislative session, TVW’s programming undergoes a shift.

In terms of produced programming, the legislative interim is the time of year when we move “outside Olympia” – both in terms of covering state government on the ground throughout the state, and creating new “interstitial” or “filler” programming that we can air between hearings the next time the Legislature meets. TVW’s trademark weekly interview programs, Inside Olympia and The Impact, go on hiatus during July and August. During that period, we work on the one long-form documentary we produce each year. Our last two, Nest Zero: Murder Hornets in Washington State and Gun Law Standoff, both won regional Emmys. 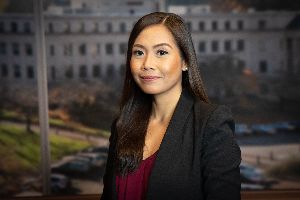 Angela Nolasco hosts Field Report , the TVW program that, as its name implies, gets TVW out into the field around the state. A prime target for this show: bills that passed the Legislature, for instance this year’s wildfire/forest health bill – it was debated, it was approved, now what will it actually look like, on the ground, in the communities of Washington?

In the coming months we’ll focus on shooting and editing videos covering dozens of state parks for our new series Washington State Parks.

We’re revamping our Washington Road Trip series to give viewers at tour of Washington’s 39 counties.

My Favorite Places with Ralph Munro has already been at the Ballard Locks, the Goldendale Observatory, and many places in between.

We’re always on the hunt for new old videos we can feature on TVW’s Historic Washington series.

Nest Zero: Murder Hornets in Washington State, has been awarded a Northwest Regional Emmy® by the National Academy of Television Arts and Sciences. The project was spear-headed by Mike McClanahan (Writer / Producer), David McGimpsey (Videographer / Editor), and Michael Peters (Graphics).